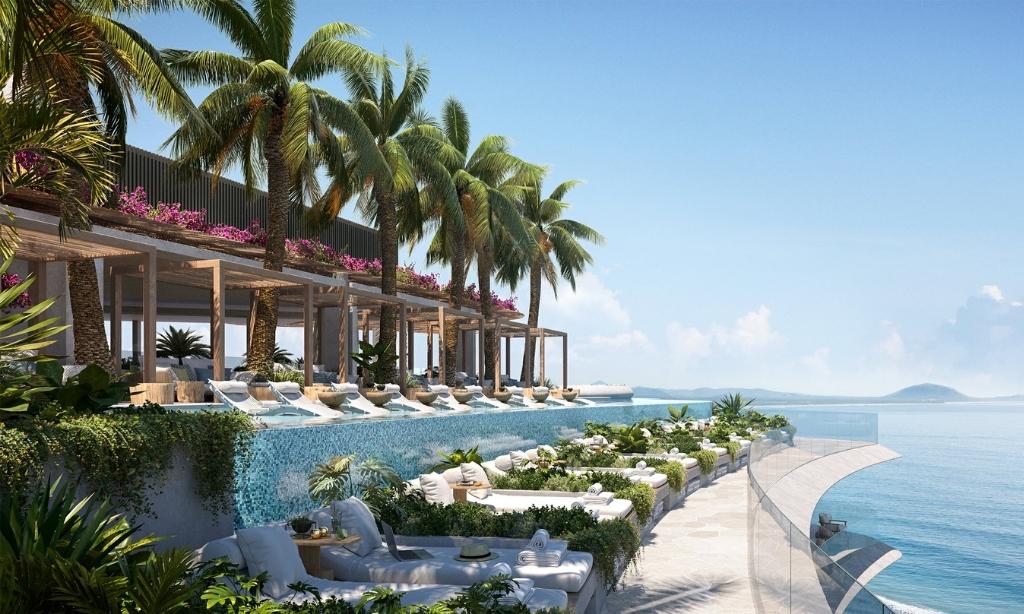 Posted on 21 Oct 2021 | Source: Development.i
PROJECT UPDATE:
On 23 August 2021, application for approval of changes to the original application for the development slated for construction at 1 Mooloolaba Esplanade was submitted to the Sunshine Coast Council.
Scott Sobey explains the reason for the changes in the application.
"Subsequent to the approval, specialist hotel design and operation consultants have undertaken a critical review of the hotel design and operational aspects to ensure the development delivers the required five-star international hotel. This review has considered the sites location and natural environment, architectural form of the building, transition between the exterior and internal spaces, the hotel public spaces, back of house, guest facilities and the hotel guest rooms.
As a result of this review design changes have been undertaken deemed necessary to deliver a five-star international hotel."
The application documents submitted by Aria Property Group reveal that the design of the proposed property has been revisited.
Included were extensive artists impressions, architectural plans and sketches of the revisited design, by A+ Design Group and Koichi Takada Architects.
Along with design changes to the buildings exterior and interior, the proposed changes included:
Key Comparison:
The configuration of the multiple dwelling units are proposed to be comprised of 8 x 2 bedroom units and 38 x 3+ bedroom units.
The submission also included an Economic Benefit Analysis. The key findings of the assessment included:
On 5 October 2021, the Sunshine Coast Council requested that the developer address some of the issues with their application with respect to:
The decision on approving the changes to the original application has been extended to 18 November 2021.
View the new design in the gallery below: 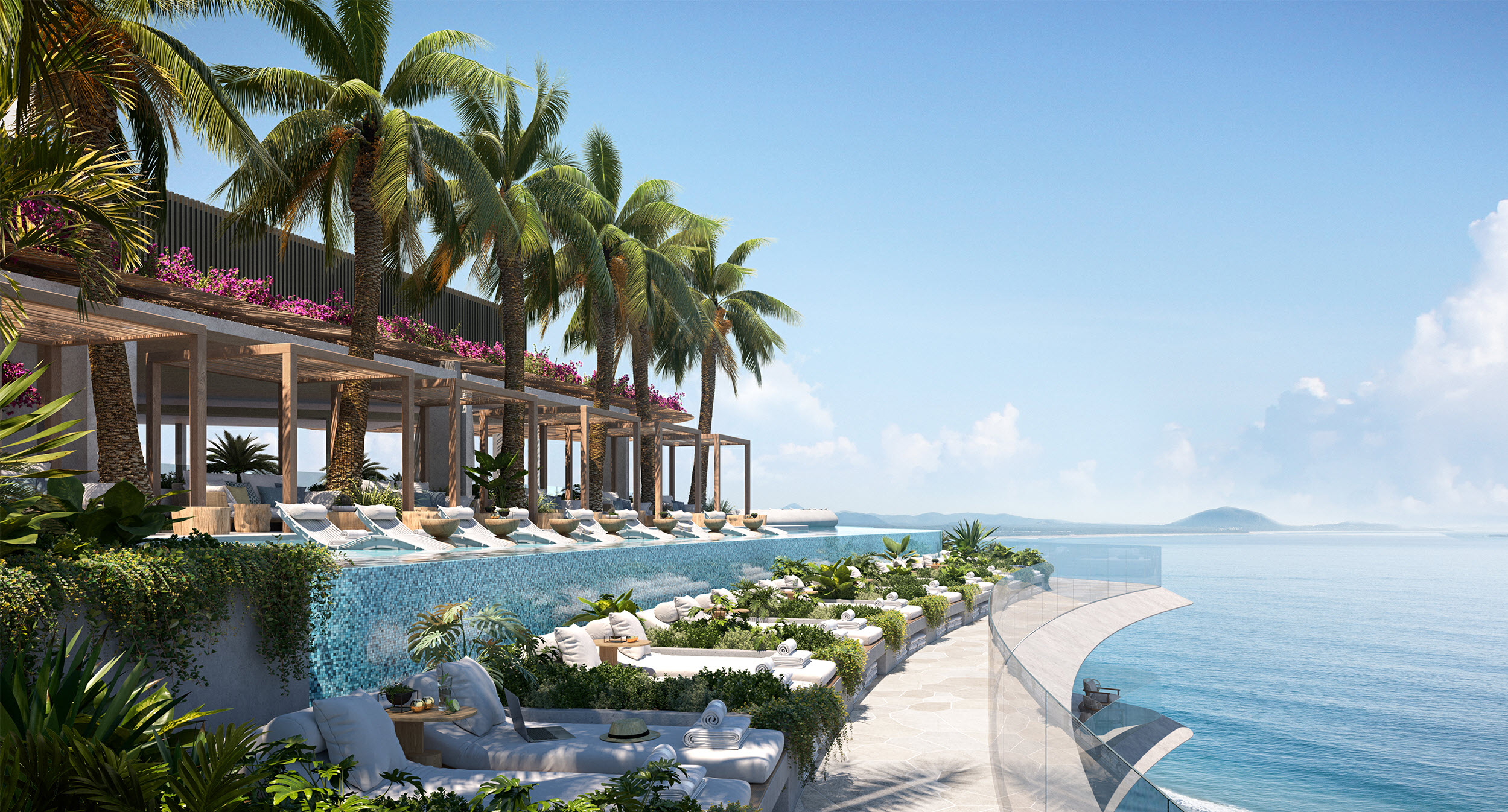 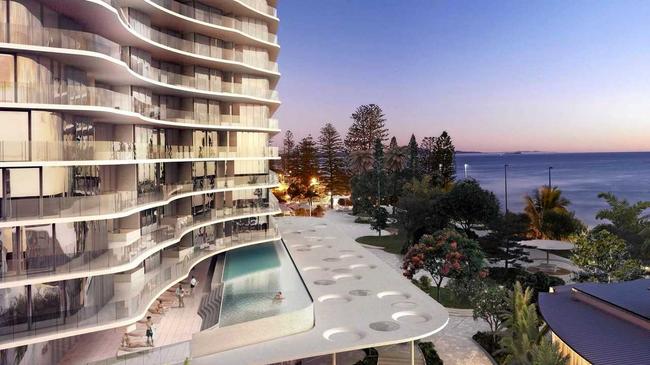 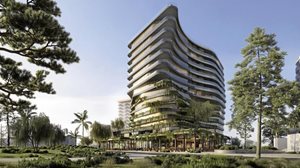 The Aria Property Group is set to embark on its largest project to date following the approval of a $350 million integrated resort development at Mooloolaba on the Sunshine Coast.

The Brisbane developer was given the green light for the project last Friday after several years working to get the development application through council. It will be the largest project Aria has embarked on since its inception in 2003 and will focus mainly on a hotel, retail and residential apartments.

The Mooloolaba development will be the first new five-star hotel on the Sunshine Coast in more than two decades, with the hotel and resort offering 139 rooms.

Sixty-six premium apartments will be constructed alongside 1764sqm of shops, restaurants and a day spa.

Aria executive Michael Hurley said the project would become an attraction on the Sunshine Coast.

“We knew we had to do something pretty special on the site and we’ve been working on it now for several years. We undertook a national design competition. Elenberg Fraser won the design competition with something we think is a truly iconic building and development,” he says.

Known for extravagant and well-planned rooftops, Aria will draw inspiration for a public bar and restaurant from the Marina Bay Sands in Singapore, W Hotel Barcelona and One Hotel, South Beach, Miami, looking to deliver the same calibre of design in Australia.

The land at 1 Esplanade, Mooloolaba has been in the family of managing director Tim Forrester for almost three decades. It is an important project for the team as the company originated on the Sunshine Coast.

“Tim and I went to school up there and were in the surf club — that’s home for us. So we are all pretty excited about Mooloolaba,” Hurley says.

“One of the most exciting things about this development, a huge piece, is the Sunshine Coast Council is doing a placemaking Mooloolaba upgrade. They’ve come up with a world-class master plan, which contemplates upgrading all of the Mooloolaba Esplanade and gives back a lot more room to parks, gardens and public spaces. We want to work with council on this.”

A contract for the hotel element of the project will be awarded next year. 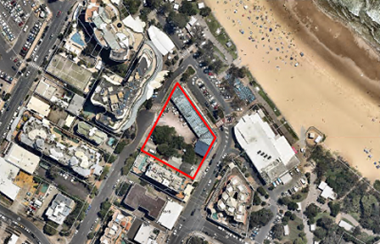 The Sunshine Coast Council has received a development application for an international standard 5-star hotel and residential development on Mooloolaba Esplanade.

Aria Property Group's application detailed its plans for the $250 million 14-story building which will include 139 hotel rooms and 66 residential apartments.

The ground floor will house a mix of retail and hospitality venues as well as a hotel bar and signature restaurant, while the rooftop will boast a public rooftop bar and restaurant and a pool with ocean views.

The hotel is pegged to be located at 1 The Esplanade, opposite Mooloolaba Surf Club and where a cafe, gelato parlor and small restaurants currently reside.

The site has been owned by Rod Forrester since 1991 and a previous application by Aria for the 2588-metres squad was rejected by the council in 2009.

Another application in 2016 was made for a $200-million development, but Aria requested the council defer its decision after they could not reach an agreement over a proposed on-site public carpark.

The latest proposal is a code-assessable application.

"It's a code assessable DA, (development application) the height, the setbacks - everything was within the code... and I expect it to be approved," Cnr Connolly said.

“It’s fantastic that today they’ve lodged officially for a five star or five-and-a-half-star hotel on the Sunshine Coast, our first one, which will add tremendously to the tourism offering in Mooloolaba."

Greenery is a prominent feature of the artist/s impressions, with plants to be established on a number of levels.

John Connolly said the new proposal will not cast shadows on the beach.

“All the testing has been done, there’ll be no shadows on the beach.

Mooloolaba remember, is a north facing beach, so shadows on the beach are impossible to have. I think we are very lucky to have it; it'll be a great offering." 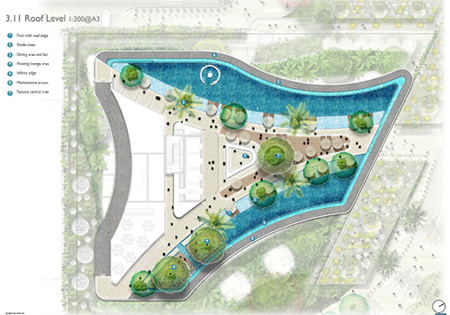 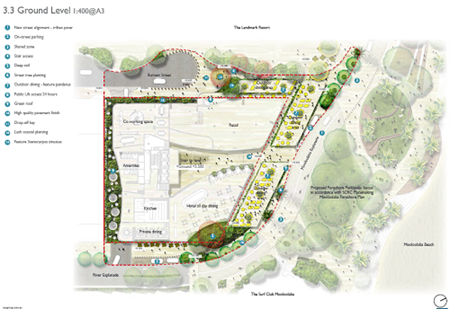