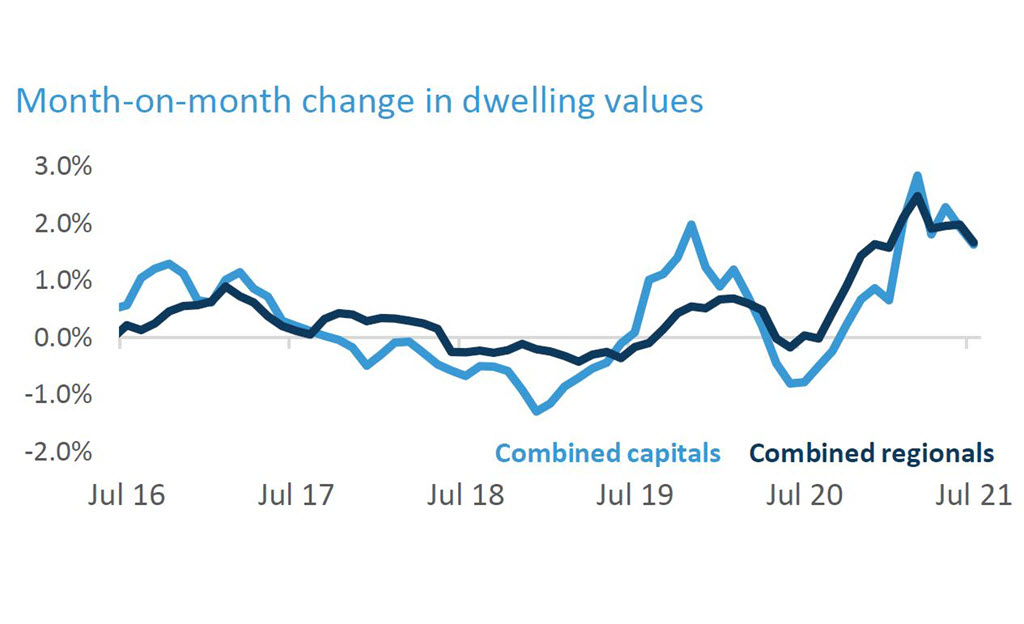 Highest annual rate of growth since 2004

The market is strong but losing steam, the 16.1% lift in national housing values over the past year is the fastest pace of annual growth since February 2004, however, the monthly growth rate has been trending lower since March this year when the national index rose 2.8%.

The lower rate of growth in housing values to several factors.

With dwelling values rising more in a month than incomes are rising in a year, housing is moving out of reach for many members of the community.

Along with declining home affordability, much of the earlier COVID-related fiscal support (particularly fiscal support related to housing) has expired.

It is, however, encouraging to see additional measures being rolled out for households and businesses as the latest COVID outbreak worsens.

On the flip side, demand is being stocked by record-low mortgage rates and the prospect that interest rates will remain low for an extended period of time.

The pace of dwelling price appreciation has slowed across each of the capital cities. Sydney has recorded the sharpest reduction, with the monthly capital gain falling from 3.7% in March to 2.0% in July.

Sydney is the most expensive capital city by some margin and it has also been the city where values have risen the most over the first seven months of the year.

Worsening affordability is likely a key contributing factor in the slowdown here, along with the negative impact on consumer sentiment as the city moves through an extended lockdown period.

Although the pace of growth has slowed, housing values continue to rise at a rate that is well above average across most areas of the country.

The previously stronger performance across regional markets relative to the capital cities has normalised through 2021.

House markets continue to record much stronger growth in values relative to units.

At the macro-level, national house values are up 18.4% over the 12 months ending July, while unit values have risen by less than half this amount, up 8.7%.

This trend where houses are rising faster in value than units is evident across every capital city except Hobart.

Hobart unit values are up 23.0% over the past year while house values have risen by 21.7% across the city. 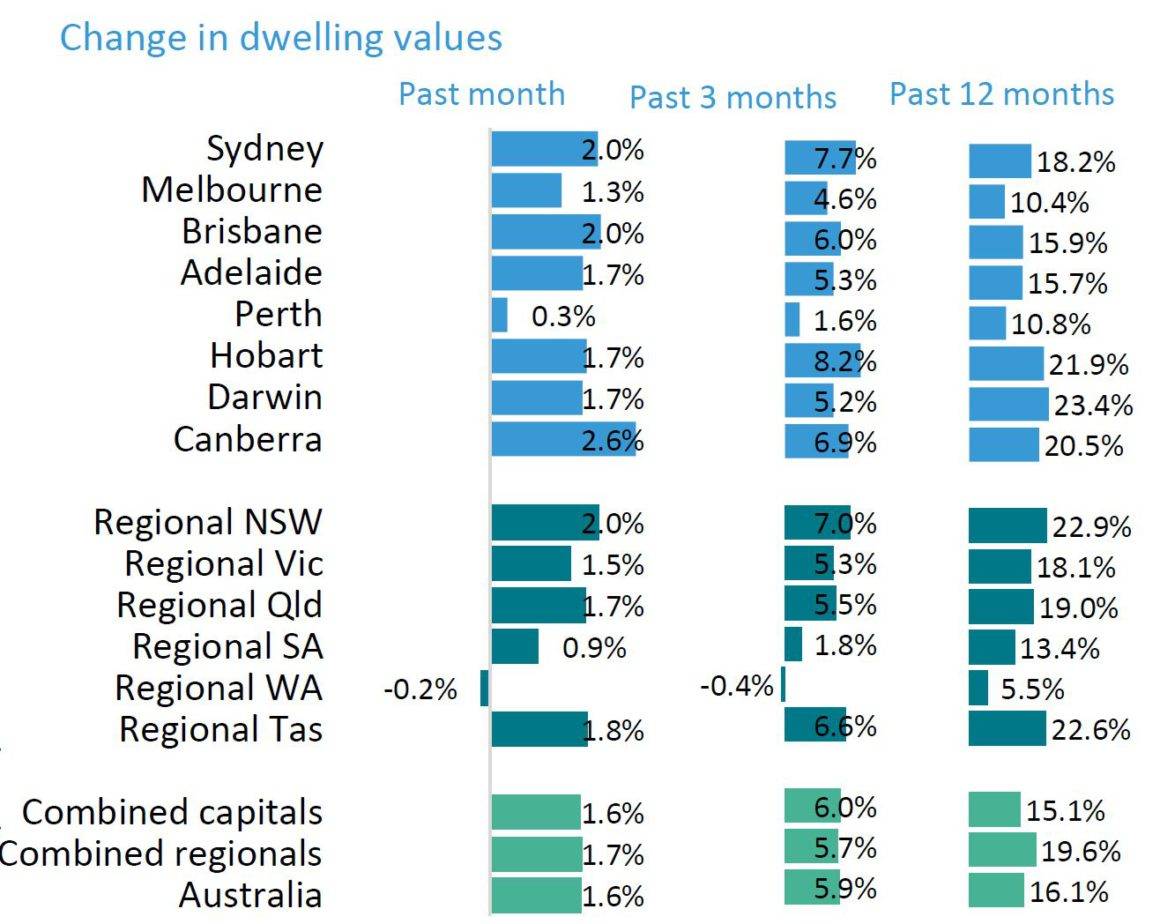 Potentially the slightly stronger conditions across Hobart’s unit sector reflect greater demand from downsizers and empty nesters, or it could be attributed to worsening affordability constraints, diverting demand into the more affordable unit sector where median values are around $156,000 lower than houses.

Advertised listing numbers remain well below average across most parts of the country despite the number of new listings added to the market trending higher than average.

Recently there has been some volatility in new inventory levels, with the number of newly advertised properties falling sharply across Sydney and Melbourne amidst lockdowns.

In Sydney, the monthly number of new listings added to the market has fallen by approximately -30% since the week ending June 27th, dragging total active listing numbers -13.7% below the five-year average.

Similarly, the number of new listings added to the Melbourne market dropped by -27.0% between the week ending July 11th and 25th.

We have seen the same trend through earlier lockdowns, where both buyer activity and vendor activity reduce before recovering to pre-lockdown levels once restrictions are eased or lifted.

With stock levels remaining tight, selling conditions have been skewed towards vendors.

Auction clearance rates have remained in the low-to-mid 70% range across the major auction markets through July and private treaty sales continue to record rapid selling times and low discounting rates.

The upper quartile of the housing market has led the pace of capital gains but is also showing the most visible signs of easing.

The most expensive quarter of capital city dwellings recorded a 7.8% lift in values over the three months ending July 2021.

While this sector of the market continues to show the strongest performance, it has also shown the sharpest slowdown, with the quarterly pace of gains reducing by -1.4 percentage points since its recent peak in April.

The number of home sales has held well above average over the year with CoreLogic estimating a 42% year-on-year lift in the number of sales.

The annual number of home sales has not been this high since the year ending January 2004. 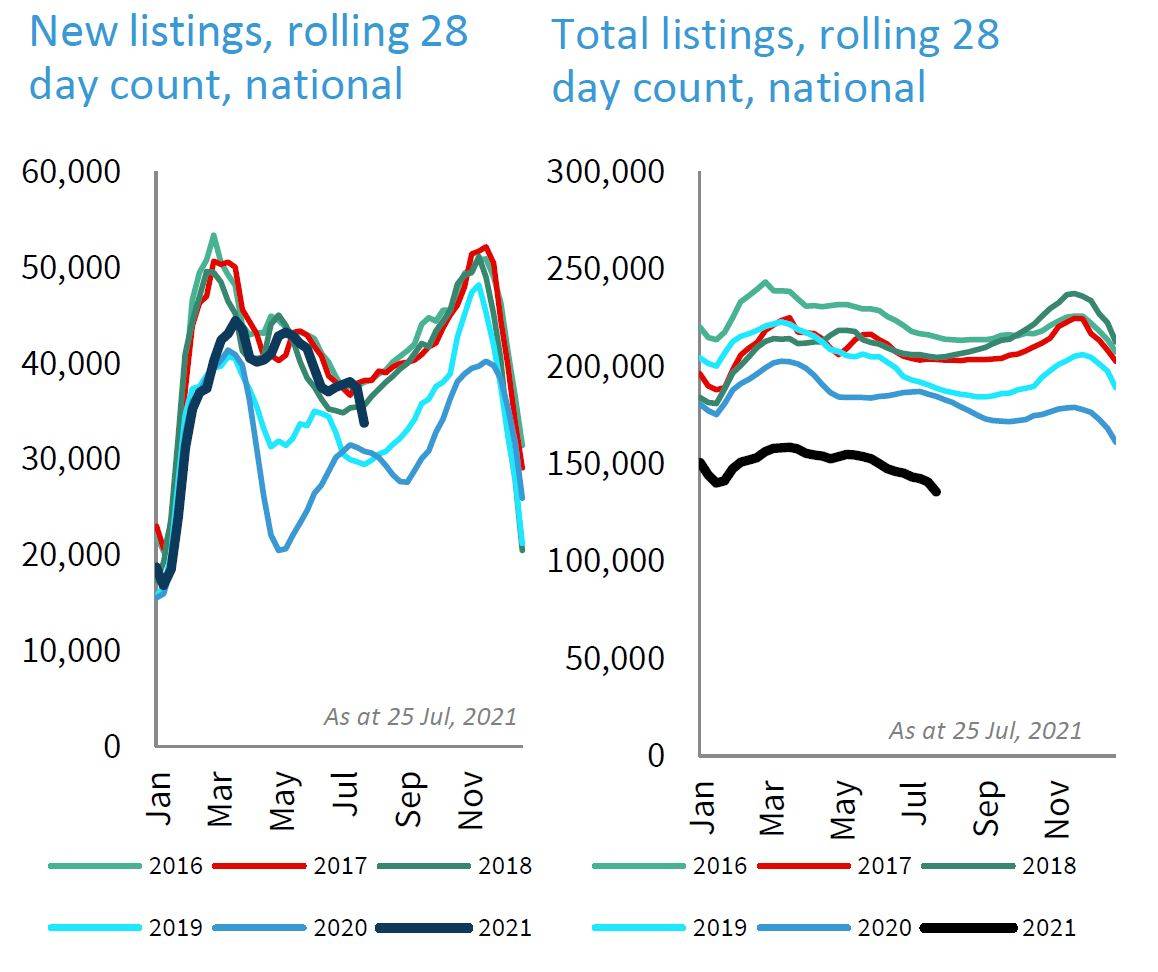 With buyer demand so strong and active listings well below average, prospective buyers are likely to be feeling a sense of urgency due to the level of competition in the market.

However, with affordability constraints starting to impact purchasing capacity, it’s possible to market activity could reduce through the second half of the year, helping to rebalance the market and take some heat out of the rate of house price growth. 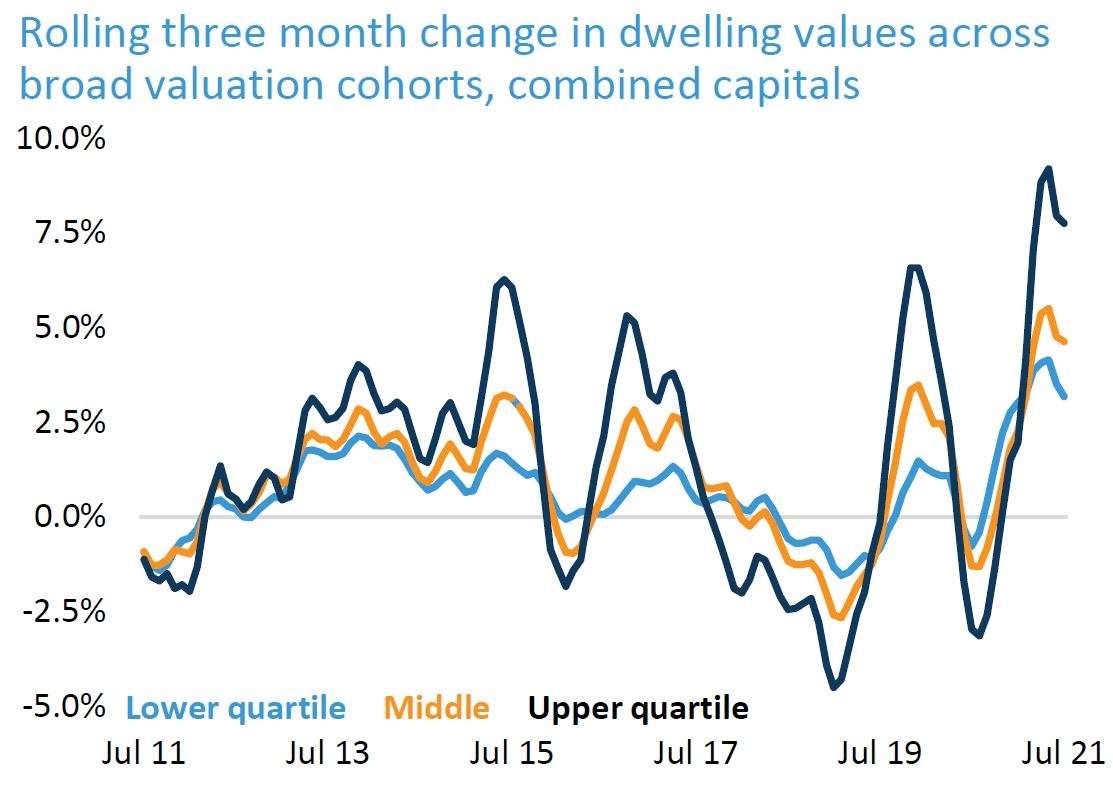 Rental markets remain tight, with the annual pace of growth in national rents lifting to 7.7%, the fastest rental appreciation since 2008. Rental conditions across Darwin and Perth are the tightest amongst the capitals reflecting low vacancy rates and high rental demand.

Both cities saw a substantial reduction in investment activity from 2014 which has likely contributed to the short supply of rental accommodation.

At the other end of the spectrum are the apartment sectors of Melbourne and Sydney, where rental conditions have been substantially looser.

The good news for landlords is that rental markets in these areas are stabilising following a substantial reduction in rents due to high vacancy rates attributable to stalled overseas migration and a preference shift away from high density living during the pandemic. 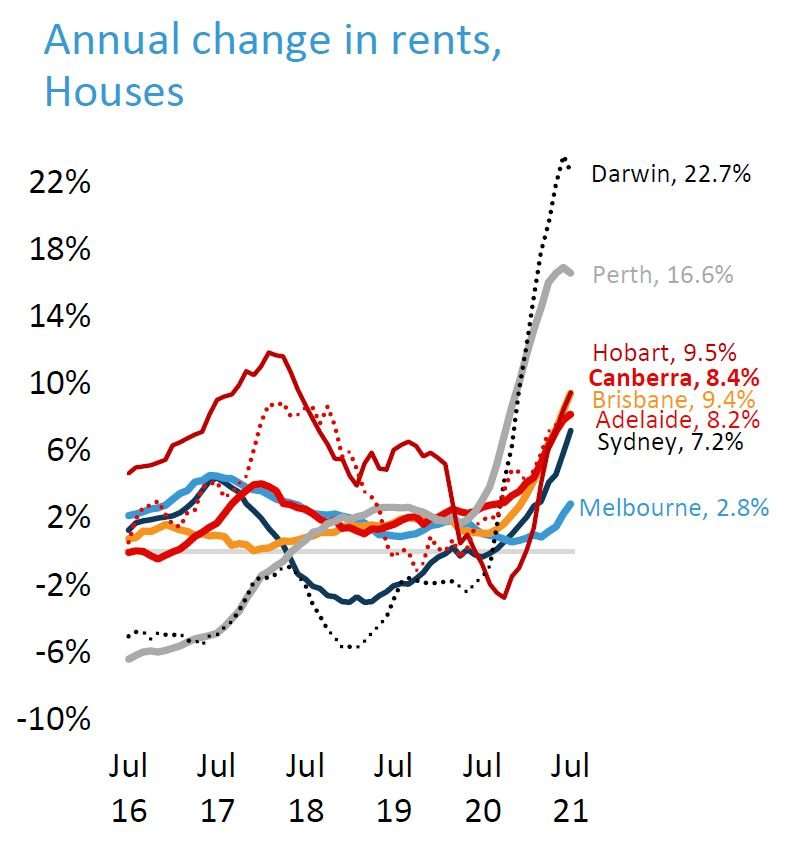 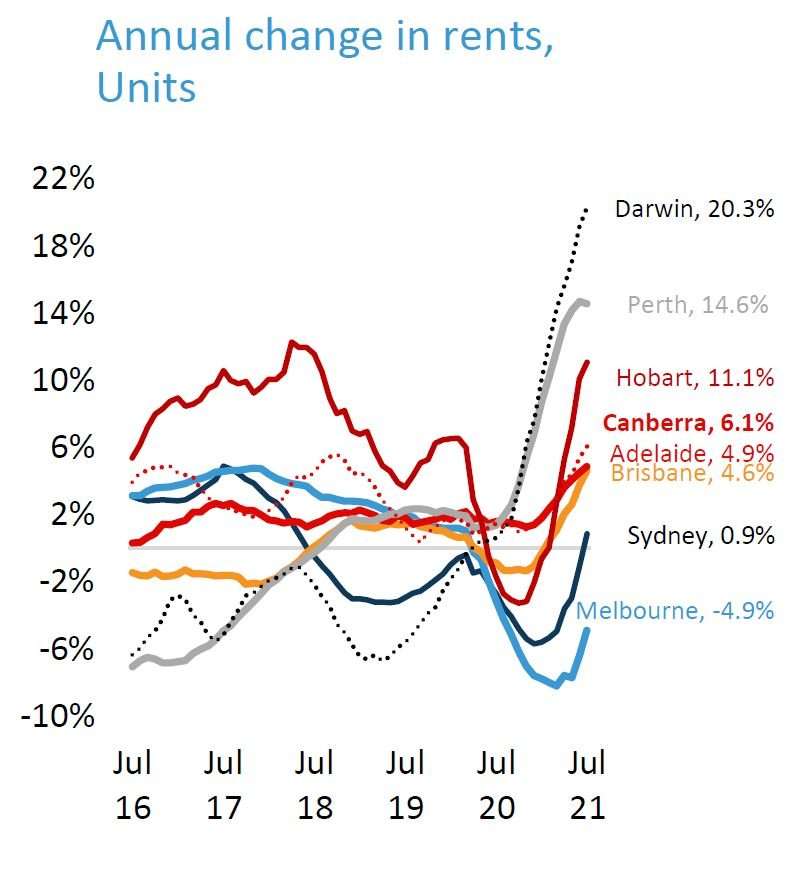 The national gross yield has reduced from 4.1% two years ago to 3.4% in July this year, which is a record low.

The most significant yield compression has been in Sydney, where gross yields have fallen to 2.5%, and in Melbourne at 2.8%.

Every other capital city is recording gross yields at 4% or higher.

Considering mortgage rates on new investment loans are averaging around 2.8%, gross rental yields outside of Sydney and Melbourne are likely to be providing opportunities for positive cash flow investment opportunities.

Considering yields outside of Sydney and Melbourne are high relative to mortgage rates and housing values are expected to rise further, we are likely to see investment activity continue to lift.

Overall, Australia’s housing market remains in a strong position, however, signs of a slowing rate of appreciation have become more evident.

The pace of capital gain has been tapering since April this year which can be attributed to growing housing affordability challenges along with less fiscal support.

It is likely recent COVID outbreaks and associated lockdowns have contributed to some of the loss of momentum as well, particularly from a transactional perspective in Sydney which is enduring an extended period of restrictions.

Previous ‘circuit-breaker’ lockdowns have generally seen housing values remain resilient to falls, but the number of home sales and listings activity has been more substantially disrupted in the most recent lockdowns. Once restrictions are lifted, it’s likely pent-up demand will flow through to increase in activity.

However, it is reasonable to assume the uncertainty associated with the duration and severity of Sydney’s lockdown could see a greater level of disruption relative to previous shorter periods of restrictions.

Although the rate of growth has eased, housing values are continuing to rise substantially faster than average.

Over the past 10 years, the average pace of monthly dwelling value appreciation has been recorded at just 0.4%.

It’s likely the rate of growth will continue to taper through the second half of 2021 as affordability constraints become more pressing and housing supply gradually lifts.

Other potential headwinds are apparent, including the possibility of tighter credit policies and an earlier-than-expected lift in interest rates.

Tighter credit policies, should they be introduced, would likely have an immediate dampening effect on housing markets, however, the trigger for another round of macroprudential intervention isn’t yet apparent.

APRA, the RBA, and the broader Council of Financial Regulators are watching for any signs of a material slip in lending standards, as well as a more substantial lift in household debt or speculative activity. While each of these metrics is on the rise, the level is likely to be insufficient to trigger a response from APRA.

Similarly, a lift in the cash rate is likely to be at least 18 months away, but, depending on the trend in labour markets and inflation, we could see rates potentially rise earlier than the RBA’s 2024 forecast.

The recent spate of lockdowns is likely to see Australia’s economy once again contract through the September quarter, a factor that is likely to keep rates on hold for a while longer, providing ongoing support for housing demand.