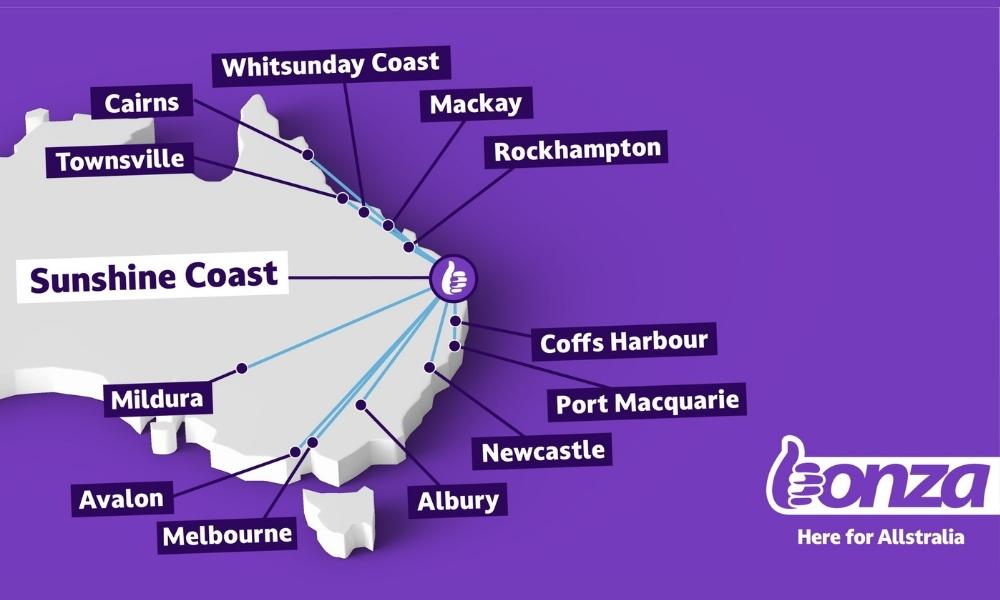 Incoming Australian low-cost carrier Bonza is making waves even before it starts flying. A chatty CEO with an audacious operating model has the airline is capturing plenty of attention in Australia and elsewhere. The surprises continued recently with a range of unusual route announcements and a choice of home airport that raised eyebrows. But Bonza's Founder and CEO explains underneath the hype, there is nothing particularly unusual about his choices.

In an exclusive webinar interview with Simple Flying, Founder and CEO Tim Jordan explained why he picked the Sunshine Coast Airport (MCY) over other airports in his original target zone. It came down to underserved or unserved routes available from the airport and the deal the airport cut with the airline to secure their business. MCY ticked both the boxes.

The way Mr Jordan sees it, Sunshine Coast locals backtracking to Brisbane (90 minutes down the motorway) to take a flight that effectively overflies their house is bonkers.

"There are so many markets in Australia where people do crazy things, not because they want to, but they're backtracking. They fly the wrong way to then fly back over their house three or four hours later, if they're lucky, or they drive 200 kilometers or 150 kilometers down a highway to them fly back over their house a few hours later. And that doesn't make sense for our industry." 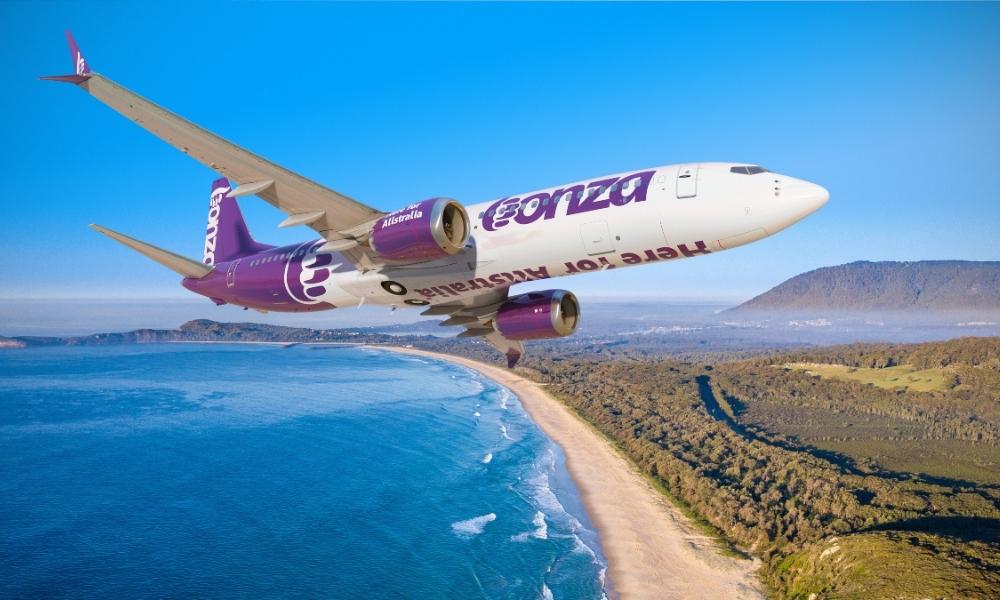 Tim Jordan wants to wipe out the backtracking habit

Flying or driving some distance to pick up a flight that effectively re-covers the ground you've just traveled to make it to your final destination is a familiar scenario for many Australians. Zeroing out the need to do so is behind many of Tim Jordan's route decisions, and he sees the Sunshine Coast as a good example of where this happens a lot.

"If you want to fly north to North Queensland as many Queenslanders do, you have to backtrack on a highway, the Bruce Highway, which is revolting. A lot of our route network, even outside the Sunshine Coast is, is flying north - it's just common sense. And it's been missing.

"What we're what we will be taking to the market is a fare of $100 or less, and you'll be at your final destination in an hour and a half. That's a very different proposition. And that is the common-sense element."

It's an operating model many low-cost carriers stick to overseas - flying time-busting routes that ignore the traditional hub-and-spoke model of higher-cost airlines. But it's not necessarily something the Australian market is conditioned to. Nonetheless, Mr Jordan thinks if he builds it, the passengers will come.

While the Bonza CEO sells his choice of a MCY base as a passenger-friendly choice, clear-eyed economic reasons also pushed the airport to the forefront.

"When you're operating markets, which are generally one to two hours in length, the airport cost component is so important," Mr Jordan explained. "Our single largest cost in our business plan was airport costs."

"We have to make sure that our business and our proposition to the market, which is low fares, we can deliver that. It's no good saying you're a low-cost airline and not delivering low fares - we know how that ends."

Sunshine Coast Airport CEO Andrew Brodie calls the deal with Bonza a "partnership." He says it will open up a range of opportunities for employment, business development, tourism growth in the area.

"Through our latest modeling and forecasting, and based on Bonza's current schedule, we estimate that Bonza's presence here on the Sunshine Coast will generate around AU$86million in visitor expenditure in the region in the first 12 months of flights being operational and bring an additional 367,000 seats directly into the Sunshine Coast," Mr Brodie says.

Neither party is putting a hard dollar figure on the value of this partnership, but a deep discount or even waiver of airport and landing charges, airport land for Bonza HQ infrastructure, and marketing assistance are some of the cards MCY could have brought to the negotiating table.

"Those airports that we announced last week, were those that were incredibly proactive, and came to us with a pricing proposition which allowed us to offer super low fares going forward," said Mr Jordan.

In response to questions about why existing airlines in Australia hadn't replicated Bonza's strategy, Tim Jordan says they cannot because their higher cost base makes the strategy unworkable.

"The other overlay is if you're a business-focused operator, it works for you to have a hub and spoke network because you can offer three or four times a day service into and out of these locations. Well, if all of a sudden they were deploying a nonstop service, that's going to be diluting their own hub and spoke network to a large degree and most likely at a cost base that they can't afford."

Tim Jordan is no fly-by-night dreamer pumped up on avgas fumes. He has a serious high-level airline pedigree. For many Australian observers, his plan seems audacious and potentially unworkable. But this type of operating model has a proven track record elsewhere. Mr Jordan's challenge is to successfully replicate it down under. 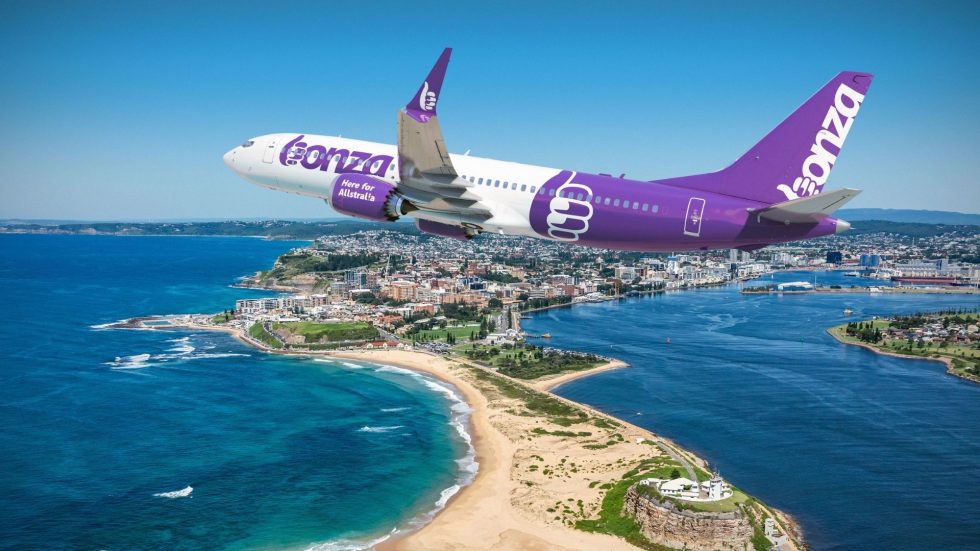 Sunshine Coast Airport will be home to Bonza’s head office and airport base with its fleet of Boeing 737 MAX aircraft. Locals and the tourism industry alike, can look forward to Bonza operating an initial 37 flights per week on 12 new routes from Sunshine Coast Airport that will directly connect the region with destinations in Queensland, Victoria and NSW. Eighty three percent of routes are new for Australian travellers and 92% not currently served by a low-cost carrier

“We couldn’t be more excited to call the Sunshine Coast the Bonza Backyard through our partnership with Sunshine Coast Airport,” says Tim Jordan, CEO of Bonza.

In October last year, Bonza announced it was taking to Australian skies and promised not to fly the golden triangle between Australia’s three largest cities. Today, they deliver on that promise by giving more choice to people living in regional areas, says Jordan.

“Amongst the reasons we are so excited to partner with Sunshine Coast Airport is our shared values and commitment to customers, community and sustainability.

“The airport has been incredibly welcoming to Bonza. Their region has boomed in recent years and the people who call it home deserve more choice when it comes to holidays and reconnecting with friends and family. From Albury to the Whitsundays, Sunshine Coast locals will now be able to fly instead of impossibly long road trips as well fly direct without a stopover in a major city.

“We’re also equally excited about opening up Sunshine Coast to leisure travellers looking to visit the recently announced number one most loved destination according to the Tourism Sentiment Index,” added Jordan.

Speaking on the announcement, Sunshine Coast Airport CEO Andrew Brodie said: “Today’s partnership announcement is a great win, not just for the airport, but for the Sunshine Coast region as a whole. As Bonza sets up their backyard here on the Sunshine Coast, it will open up a range of opportunities for employment, business development, tourism growth and in re-connecting with family, friends and colleagues,” says Brodie.

“Through our latest modelling and forecasting, and based on Bonza’s current schedule, we estimate that Bonza’s presence here on the Sunshine Coast will generate around $86million in visitor expenditure in the region in the first 12 months of flights being operational and bring an additional 367,000 seats directly into the Sunshine Coast.
“With three (3) aircraft based here on the Sunshine Coast and the influx of travellers from new destinations, a range of direct and indirect employment opportunities will be created to support tourism and business growth.

“Bonza’s arrival on the Sunshine Coast is also in line with the airport’s $500 million expansion plans to further strengthen its role as a regional facilitator of economic growth and diversity.

“We have big plans for our airport and over the coming years we will double the size of our terminal, the Aerospace precinct will expand from 9 to 30 hectares and our Southern Gateway commercial precinct will start to take shape.

“By FY27, the developed Sunshine Coast Airport will facilitate increased visitation to tourism businesses across the state – supporting 4,000 direct and indirect jobs and $255 million in GSP.

“When our development is completed, more than 1,600 jobs will be created at the airport.

The airport continues to honour its commitment to providing more services to more destinations at more consistent times.

“As the Airport continues to grow, so too do we maintain our commitment to supporting residents and visitors by providing more consistent services to more destinations. With Bonza’s route map, we will essentially see our destinations almost triple overnight. We’re also very excited to see direct flights to popular destinations in North Queensland, NSW and Victoria – a first for the Sunshine Coast Airport.

“Sunshine Coast Airport’s increased domestic connectivity will spearhead the region’s recovery with 16 destinations connected to the Sunshine Coast when Bonza takes flight, up from three pre-COVID, boosting us from 10th to the 2nd most connected airport in Queensland,” added Brodie.

In true Bonza style, the head office at Sunshine Coast Airport won’t be a traditional set-up and instead is being coined the ‘Bonza Backyard’. This news will bring future job opportunities to the Sunshine Coast as well as provide a ‘home’ for ‘Bonza Legends’ to collaborate in person as needed with a large proportion of roles to be based virtually all over the country.

“Bonza’s Backyard at Sunshine Coast Airport provides us with an ideal base for our virtual workforce to come together – just as Aussies do in their own backyards, we can’t think of a better location” said Jordan. 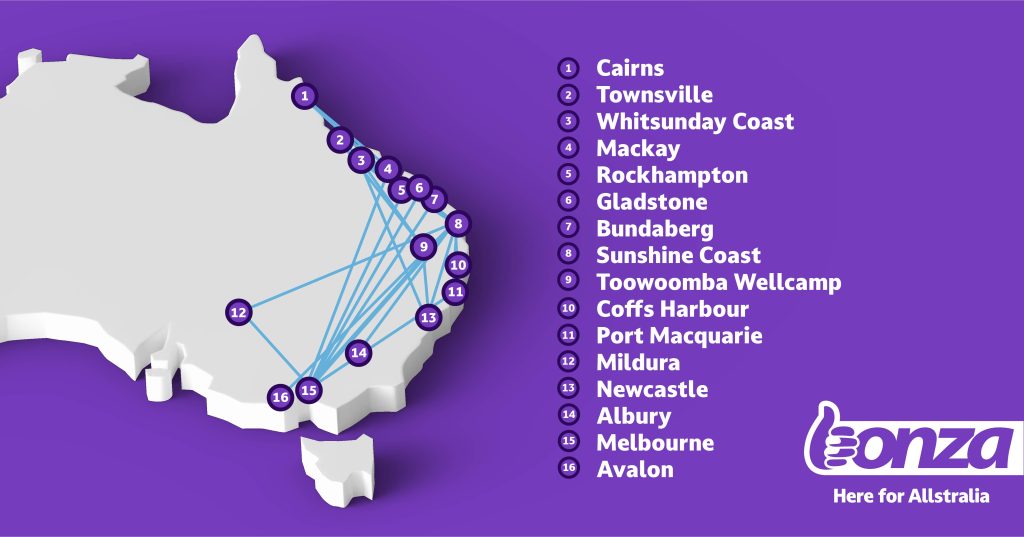 Jordan also shared Bonza’s decision to go paperless with the launch of its own app saying its commitment to technology is part of a broader focus on customer experience and sustainability: “We encourage everyone to download the new app to be the first in the know as to when flights will be going on sale, fare sales, destination news and travel tips. We’re also giving people the chance to win flights via the app”.

Once all functions are added to the app in the coming weeks, it will be where Aussies can plan, book and manage their bookings. It’ll also be where travellers can check in and access their boarding passes – eliminating the need for printing unnecessarily and reducing the need to check-in at the airport. Once onboard, the retail offering, travel information and much more will be available exclusively through the app.

“Never before have the settings been better to challenge the norms to support a streamlined customer engagement experience and focusing on sustainability from day one by removing the need for traditional paper based processes,” said Jordan.

Australians are encouraged to download the app “Fly Bonza” on the Apple App Store or Google Play now and keep an eye out for updates as new functions are added. Flights are due to go on sale within the next two months with Bonza’s first flight date subject to regulatory approval. 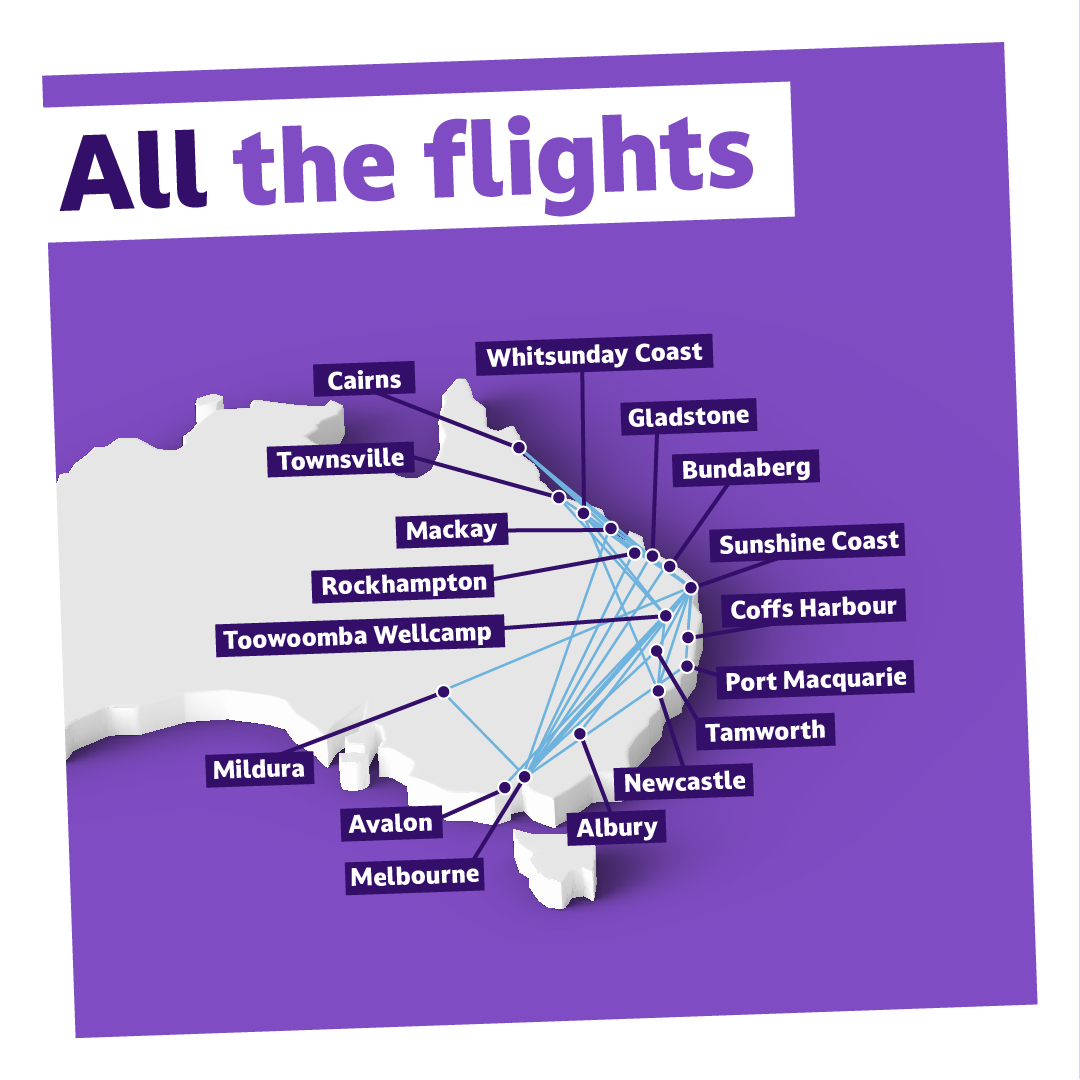 12 routes including Sunshine Coast to:

Bonza – Australia’s new, and only independent low-cost airline takes off in the second quarter of 2022*, enabling Australians to explore more of their own backyard, and at low-cost prices. Bonza’s destinations will be announced in the coming months and will be primarily focused on stimulating new demand for travel across Australia.